Being kinky has its ups and downs. Being kinky and out to family members has its own set of risks. While many of them are obvious; some are not. You see my mother who is both intelligent and open minded can’t seem to tell the difference between what I do (Rope, BDSM, etc) and Furries. To her I guess we’re all just sex freaks. Which is fine, I’d rather be thought of as a deviant than a pious saint any day.  In case you’re interested here’s the post where I actually discussed my Mother and Furries for the first time.  To say she remains curious and consistent in informing me of the “Big Furry happenings” in her city’s paper and news reports would be an understatement. Maybe she’s a secret furry?  I doubt it but anything is possible. 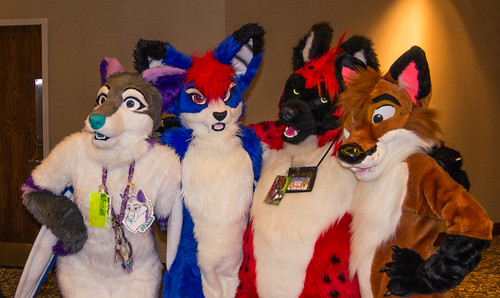 Switching away from blood relationships to kinky ones. Furries are a fascination for both Alice and Lord Raven. They’ve been to events where Furries were part of the mix with the other kinksters. Now my take is that some of their playful frolicking and lightheartedness didn’t mix well with the leather set and purists. Not that the playful costumed creatures minded at all.  And well you probably haven’t really lived until you’ve annoyed some of the leather set anyway.  LR and I have talked at length on occasion about some friends of his that are Furries, how different animals have generally speaking different traits and a basic set of standard characteristics. As for me though while I have no objections to them it also doesn’t trip my trigger.  Too much well fur and not enough skin from what I can tell.
My personality is probably too reserved and I tend to be more of the dark and scary type which I don’t perceive much of a place for in their world.  Which is fine people need happy sexy places too not just dark and mean ones.
On a final closing note I just learned that my annual trip to Pittsburgh will overlay the Anthrocon convention this year.   And given the parts of town I frequent if nothing more I’ll get a window seat to some of the comings and going of the conference attendees for a day or two.  Hell maybe for once I’ll act like a respectable sex writer and reach out and conduct a few real interviews.   Actually I think that might be a great idea.

After a year away Mal drifted back out of the ether and associated haze. He occasionally writes here and regularly publisheses obscure photo themed collections and projects.

This was the home of Malflic.  He is off running a nicer part of hell now.  Good Day to you!